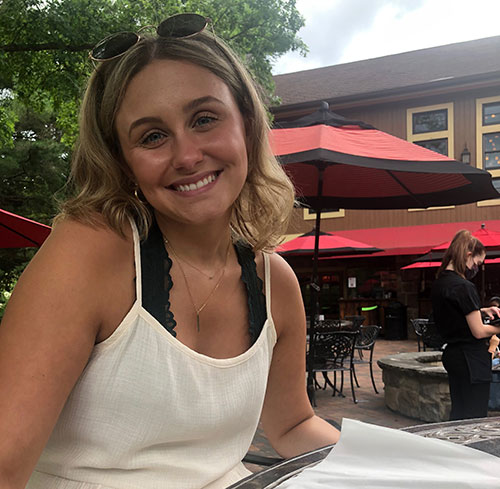 Meghan Griffin ’23 has always been interested in making a meaningful change in her career. “I am planning on going to law school for civil rights or human rights law, with my main goal being to help those experiencing violations of what should be recognized as basic rights based on their identity, or their different intersecting identities,” she says.

One of her favorite classes at Hiram has been because of the Garfield Presidency Scholars Program where she is a current member, as it “is not only a class but a study-away experience as well.” Griffin has researched major political issues throughout history and determined if there are any parallels in today’s government. “Through the study of major presidents throughout American history, I am able to see how individuals are shaped by their experiences, which causes them to interact in certain ways with others,” says Griffin.

When it comes to understanding politics, Griffin is encouraged by making a difference in policies that seem to disserve society. She says, “I think there is an endless amount of research that can be done about politics, from an individual level, up through a systematic level that explains why people vote and think the way they do.” Furthermore, she believes that the theoretical side of the discipline aids in forming a viewpoint on “how American society should operate” and what resources it might provide. “When one sees those things lacking, a desire for change comes about. I think political science has heightened my desire for meaningful change and has also shown me ways to actually commit to that desire,” she says.

Griffin serves as the President of the Feminism in Action club at Hiram and works at the college’s bookstore as well as two jobs off-campus. This summer, she is working for the National Coalition for the Homeless and is looking forward to graduating.

We use cookies to provide you with a better experience. By continuing to use this site you agree to our use of cookies.
We’d Love to Hear from You!

Thank you for visiting our site and learning more about Hiram College. We value your feedback and would love if you took part in our brief survey.