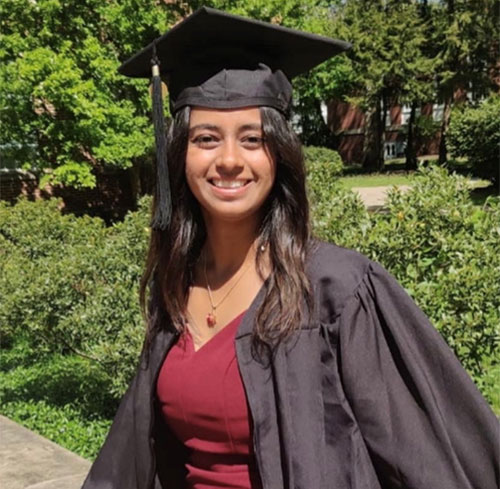 Rachna Prasad ‘22 found a home at Hiram College. After finishing high school in India, Prasad traveled alone to Hiram, OH to pursue her education. “My first year here, I was extremely unsure of everything,” she says. However, she dedicated herself to her studies and her involvement on campus.

She first began working in the dining hall during her first year which eventually led her into working as an ARCH tutor, a Writing, Course, and Lab assistant, a Welcome Center Student Worker, and a Resident Assistant. Prasad served on the Student Community Council and Student Senate, was appointed as a Student Ambassador, and was the Treasurer and President of the Intercultural Forum. In her spare time, she also was a part of HIPAC, Medicus, and Hiram’s Dance Team. She says, “I took on leadership roles and discovered how much I loved helping others. Soon enough, I realized that in the process of keeping myself busy, Hiram had gotten me out of my shell and allowed me to discover myself and accomplish more than I thought I was capable of.”

Prasad recalls that most of her academic inspirations developed because of the people she befriended at Hiram. “I have met such incredible people here with unique and inspiring stories that have kept me going,” she says.

As the 2022 recipient of the Dively Award, Hiram’s Distinguished Student Leadership Award, Prasad was astounded that she was presented with such an honor. “It was incredibly surprising knowing how many people knew me and thought my accomplishments were deserving of such an honorary award,” she says. “We had all received emails about voting for the nominees [last year] and I saw some of my friends who were graduating seniors on that list. These were all people I had looked up to during my time at Hiram; people who made a difference at Hiram and were well-known for their involvement and their impact. So, when I got the email this year about being nominated for the Dively award, I was thrilled and extremely honored to know that I had joined that list of influential people on Hiram’s campus.”

Prasad plans on going to medical school at NEOMED after graduation.

We use cookies to provide you with a better experience. By continuing to use this site you agree to our use of cookies.
We’d Love to Hear from You!

Thank you for visiting our site and learning more about Hiram College. We value your feedback and would love if you took part in our brief survey.